Nothing Like Death, Dystopia and Depression to Make You Smile

So lately my dad has been trying to get me to watch the 1997, sci-fi drama, 'Gattaca' (Ethan Hawke/Uma Thurman/Jude Law). By trying to, I mean waiting for it to come on Austar and record it for me to watch on one of my very busy days of "waiting-for-reality-to-catch-up-with-my-dreams". Point is, I LOVE novels and films that are set in a dystopian past, present, future or parallel universe.

The whole genre of dystopia has just recently become very popular among "the youth" (I suppose that includes me) with popular book series like 'The Hunger Games' and 'Divergent' (and many more), both books which I'm big fans of, being embraced in the world of film and television. Personally, I fell in love with Dystopia in High School when I had to read Aldous Huxley's 'Brave New World' in English and, come to think of it, before that I suppose when reading the "Tomorrow When The War Began" series when I was 12 (It's not really dystopia but it's along the same vein). Anyway, So, 'Gattaca' is also a film set in a dystopia-like future and I truly, thoroughly enjoyed it! Just like Dad said I would. All though it got me thinking about death.

My favourite character in the film was Jude Laws character Jerome and *SPOILER*ALLERT*SPOILER ALERT* he dies/commits suicide at the very very end. This, only made me love his character more. I LOVE when characters in books and movies die or commit suicide, it honest to god makes me love them more. I'm a pretty morbid person but I swear this one makes sense so bear with me. It's a bit like how you only miss somebody when they're gone. See when my favourite character dies, I love them more because I get to delve into their character more (if the author/writer doesn't do it for me) and relish in the authorization that their death gives me to analyse all the details, small and innocuous to the obvious and blunt, of their entire being. When the character dies, everything they went through in the story, you cherish so much more because that is all there will ever be. Those are just some of the reasons I love when my favourite character dies, but I also love when a book or movie just, ends. No sequel, no elongated series, no epilogue. It just ends. Again, don't get me wrong there are some series I LOVE or sequels and epilogues that are wonderful. But for me, I like "one offs" or trilogies that will only ever be trilogies (the kind that were only ever meant to be, not series that just never finished). 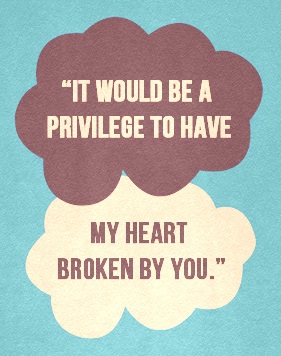 I like that feeling of having something I love, be so "final" so that it becomes something I can cherish, hold onto, remember and then relive again and again. Sure you can make that argument for long series like Harry Potter who also has character deaths in it (-cough-dumbledore/sirius/snape/dobby/everybodies parents and siblings-cough-*wipes away tear*) but the longer they are, the more holes you can poke in them, the more you can expand them in fanfiction and the less the small and specific details matter.

One author I've recently fell in love with "as an author" is John Green. I have loved him as a youtuber (him and his brother are the popular "Vlog Brothers" on youtube, check out a link to them on the right somewhere) for a long time now, but never read his books. I finally got around to it and man...it's a good thing I like death! But he is the exact kind of author I like. The point of view in his books, is through the eyes of a, what you could say, minor character. Your point of view is through the eyes of the most average and relatively least dynamic of all the "main characters" in the book. In two of his books that I really like ('The Fault in Our Stars' and 'Looking For Alaska') John Green makes you fall in love with who is seemingly the REAL "Main Character". The bubbly one, the energetic one, the mysterious and dynamic one. So the whole time you're reading, you're watching this imaginary world, and all it's glorious and much more interesting characters, go by living grand adventures. Then *SPOILER ALERT*SPOILER ALERT* he kills them. Not even at the end of the book either. This, made me love him as a writer and the books even more. People and teachers will tell you that killing a main character is a sign of poor writing skill, but that's bull shit. When the character in both "Looking For Alaska" and "The Fault In Our Stars" dies, It's like the final whispered note of a siren out in the middle of raging seas, that last tug that pulls you in and then BAM, you're gone. Seduced by the majesty of the ocean, which is in this case, John Greens books.


It always shocked me when I realized that I wasn't the only person in the world who thought and felt such strange and awful things. - John Green.


It's writing like that, that makes me want to be a writer myself. To be able to make a combination of 26 letters sound beautiful, sad, poetic, quirky, hilarious, inspiring and relatable all at once. To be able to break the rules and do what I want, in what ever it is that I choose to do.

People may think it's weird that somebody who experiences depression, in a lot of their daily life, would enjoy such sad and morbid things. But I do. It's one of the very, very few times where I can express myself and actually feel normal, because it's normal to feel sad after watching/reading 'Atonement' or to cry when Mufasa dies in 'The Lion King'. It is the only time when my reaction, and general state of being most of the time, is considered normal and my behaviour not looked down upon for being mentally ill. When I write poetry or lyrics that are depressing, or a heartbreaking story. It's not to make the audience depressed.